Jessina Ghimire and Aeja Khanal
On the first day, UNHRC discussed the agenda ‘Protection of Migrants’. The committee commenced with the general speaker’s list and soon many countries like Nepal, Germany, China, Egypt, Australia and many more came forward and presented their stance.

The delegate of Egypt talked about the asylum seekers and refugees that are staying in Egypt which was soon followed by a moderated caucus on the topic “Condition of Migrant Workers” which was unanimously passed and many delegates enthusiastically spoke on the topic. The delegate of Syria mentioned that the migrants in Syria do not come to work and most of them are Muslims, so they are discriminated on the basis of their religion (Point well noted, delegate).

One after another, moderated caucuses were raised in the committee. The committee quickly moved on to discuss “Illegal Migrants” as proposed by the delegate of Australia. During this discussion, the delegate of Syria suggested that the refugees should be allowed to stay in countries for a certain time from where they will be reintegrated to other countries as
way to manage refugee rate. Furthermore, the delegate of Russia discussed facts in the committee, stating how four million illegal migrants are present in Russia, majority of them are found to be doing social crimes. This raised a question of how generous a country is really supposed to be to migrants.

On day 2, the committee began with the quintessential role call and then the general speaker’s list. The delegate of USA argued that USA was the best place for migrants (Delegate, are you sure?). However, the delegate quickly clarified that her claim was for legal migrants and was not in any way directed towards illegal migrants. Following this, the delegate of Syria lamented over its lost citizens and discussed over its protected migrants in Germany, Greece and Russia.

After the speeches, the committee discussed a few moderated caucuses. The committee was then ambushed by a crisis that left the delegates confused and panicked. The crisis was regarding a bombing that was conducted in refugee camps in Syria. According to witnesses, the CIA was responsible for the bombing. After an update which stated that the bodies were identified as political refugees and activists who were allegedly against Assad. The bombing was now blamed upon Syria and the committee spent quite a while coming up with effective solutions. After further discussion, the ISIS was held responsible and all the countries were free of blame. 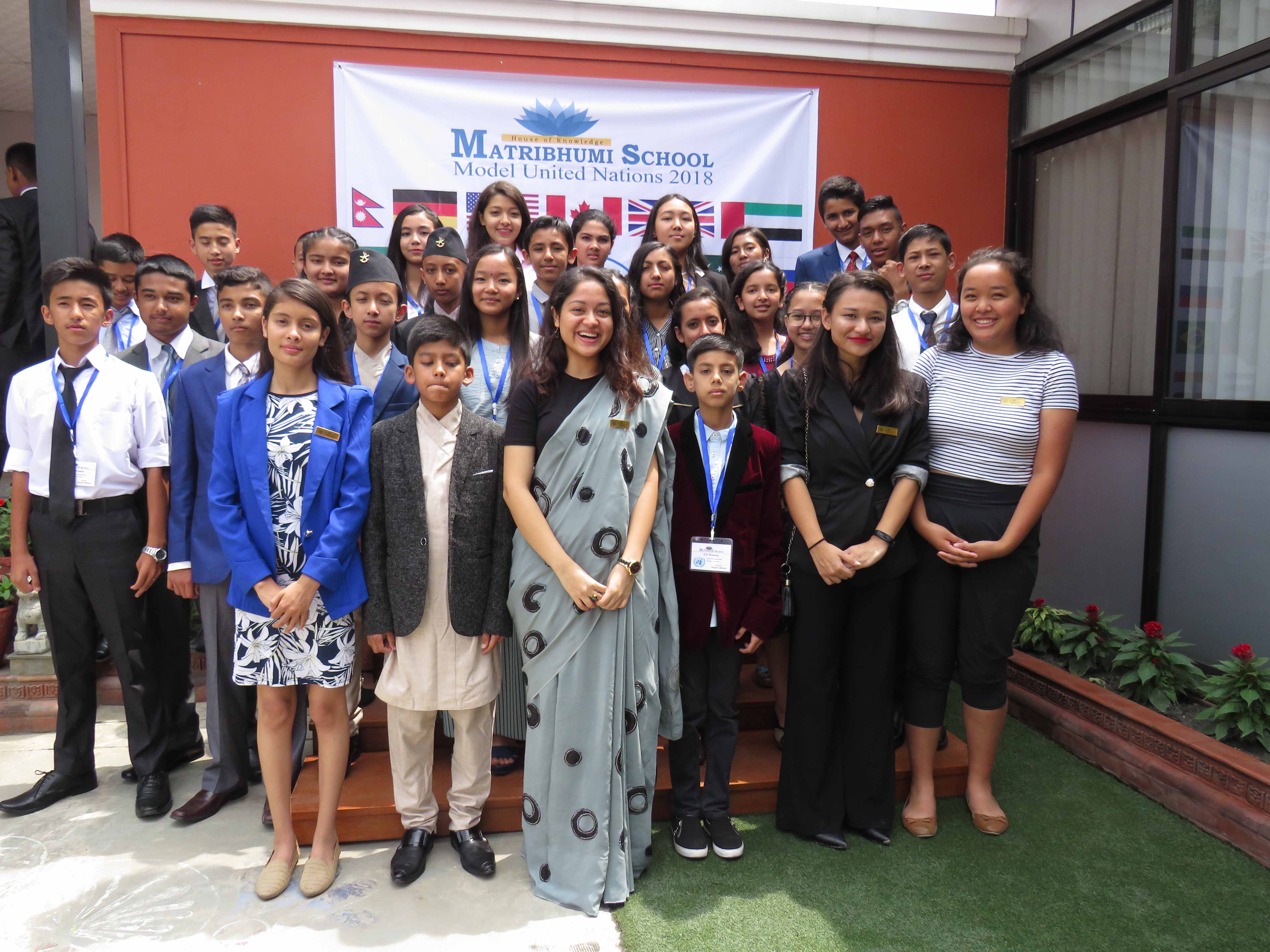 Lamin Tamang and Jharana Karki
The UN Women, led by an executive board of powerful women, discussed the agenda ‘Girl Trafficking’ where delegates discussed their stances and presented current situation of the issue in their country. With all delegates eager to discuss more specific topics, the committee dove right into moderated caucuses. Delegates were unanimously passing caucuses and discussing proper solutions to stop girl trafficking. From strengthening border security to empowering women, the committee was coming with solutions that could actually be implemented in the real world.

After a few moderated caucuses and unanswered difficult questions, the delegates moved back into the general speaker’s list. The delegates were so active and intellectual; the dais members could not stop gushing over how impressed they were. They constantly complimented the delegates and commended them for their participation.
On the second day the committee took an unexpected twist with the crisis. The crisis discussed was regarding the trafficking of women from countries such as Brazil, Ukraine and Kenya by the ISIS. The committee even introduced an ISIS representative (who claimed to be funded by countries such as Pakistan, Syria and Afghanistan) to intensify the crisis and make it a little more challenging for the delegates. After thorough discussion of the government’s responsibilities, difficult questions and a lot of table banging, the committee finally came to a solution to the crisis.

This committee should also be mentioned for their highly entertaining ‘Motion of Entertainment’. The Vice Chair was very enthusiastic about making people dance and there were many delegates at the edge of their seats cheering for the boys who were ball dancing.

Importance of MUN Model United Nations which is popularly known as MUN is a simulation of real Unit...